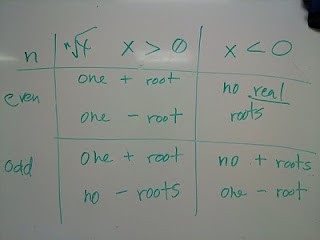 This photo was taken from my camera phone right after 1st hour was over.  I read pieces of a book over Christmas Break called Never Work Harder Than Your Students, and those few pages did a lot to free my time and rethink the priorities of my time in the classroom.  I think it has improved my instruction because I've had to be more creative in order to present my lessons with "less" work.

One factor that significantly contributes to my workload is rewriting notes and homework assignments on a different board when I move between the 3 different classrooms I travel to.  Using the SMARTboard for notes and interactive tools alleviates some of this hourly repetition, but if the computer is down or the server is slow, then I end up having to use the whiteboard and rewriting notes in subsequent classrooms.

The kids give me some trouble over having my cellphone out, but I think it models good mobile device use, which is a good thing.
at 10:00 2 comments:
Labels: cellphones, IWB, lesson-planning, notes, smartboard

I heard today from someone "in the know" at my school that given the EXTREME budget shortfall we are experiencing, the 4 yr PC replacement cycle plan we had been on (and my school would have reached next year) has been extended to an EIGHT YEAR cycle.

Really?  That has to be a joke, right?  I mean the computer I bought in 2002 for college still gets a little use in the basement, but I've upgraded the RAM since then and paid some more then so I could get some extended use out of it.  Our school machines, most surely, went to the lowest bidder, and are beginning to die a painful death.  (Although I'm not sure if the death is more painful for the machines, or for the teachers' whose lesson plans are thwarted whenever one goes down.)

My only assumption is that admin across the parking lot is really just holding out for some sweet grant that magically wishes us new machines.  I'm quite understanding that attempting to extend the lives of our current machines is probably a good idea fiscally (and I would even probably end up trying to snag a few of our current machines for in-class use if they WERE to be replace "on time.").  It's just hard to shrug off my envy frustrations when I read about lesson plans using iPod touches and the bubbling excitement over the possibilities of integrating iPads when I'm looking toward a future relationship with an 8-year-old PC.

Finally, while I'm at it, anyone with money to share want to upgrade the computers in the McCluer North math department?  Doesn't hurt to send out a call, right?
at 17:20 No comments:
Labels: computers, edtech, iPod, PC 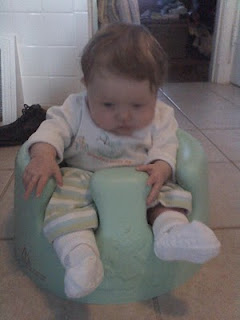 Lu found her feet this morning.

You try to share some of your personal life with your students, but my life lives in social media, not on celluloid.  So, instead of being able to share a facebook picture with my classes, I have to jump through hoops and email/save/upload.  More difficult than it needs to be!
at 07:29 No comments:
Labels: facebook, life, lucy, social medai
Newer Posts Older Posts Home
Subscribe to: Posts (Atom)