Anyone else hate scantrons? No, not the idea of multiple-choice assessments - those have their place. I just mean the actual slips of paper and machine. I don't know how I thought those got graded when I was in high school, but I certainly had no idea it was this.

And as a teacher I certainly never feel like this when I'm waiting in line for the ONE machine in the building. 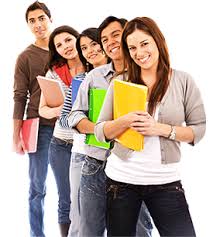 So, I've stopped using scantrons. Two things have emerged as more useful than a scantron ever was because feedback is much more quickly available, and item analysis is automatically figured for me. On the iPads, I use an app called Socrative, which allows for MC and free-response items, and even allows for immediate feedback on MC items if I want. The other approach, which I think I like even better, is to create a blank Google Form with about 50 items and choices that just say "A, B, C, D."

Advantages with the Google Form:
I grade those Google Form bubblesheets with an app script called Flubaroo. Here's a tutorial on using integrating Flubaroo with your current forms.


My students like using the Socrative app for more formative, informal assessments when it doesn't really matter if they tap the wrong square and are whisked to the next question, but I got a lot of positive feedback from the "bubblesheet" this August, too (They'd used both tools by then.)

Flubaroo scoring is fast, reliable, and easy (and not app or device dependent. Another thing I'm big on.) I had a couple of my classes' finals completely "graded" about 2 minutes after the final student was done last spring. Quick feedback is a high-yield strategy for developing goal-setters.