It's technology, so you're familiar with the inevitable march towards obsolescence, but you're nostalgic, too, so you don't want to just chuck the old machines out with the garbage (or try to recycle them). Why not get some use out of them?! 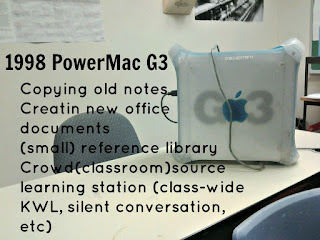 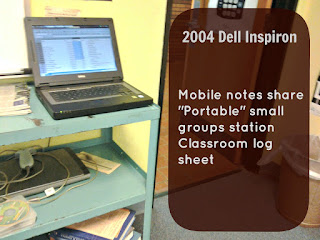 Here's just a few ideas that I've utilized, and the glorious machines that made it all possible.

I recovered this old machine in 2008 from the back of the library in the A/V graveyard. After inquiring to A/V and the tech department about what I would need to do to "legally" take it home, I was met mostly with confusion about my motives for taking that super old tower. Translation - it was so old no one cared.

I had to buy a DVD drive for it so I could install my personal copy of OS X over the OS 9 living on the 7 gb (?!!) harddrive, and upgraded the RAM an embarrassingly small 256 MB, but alas, she was mine. My first goal for this Mac was as a media center to stream Hulu to my TV, but... this computer was from 1998. Surprisingly, it WAS able to stream Pandora.

This Mac returned to school after my wife (and I?) eventually decided we didn't need a bondi blue  Pandora machine sitting on the floor in our living room. And at school, it solved a problem for me! I felt like kids coming back from illness, field trip, or suspension and needing previous day's notes was becoming a daily occurrence, so the Mac eventually became my yesterday's-notes, type papers, and use the dictionary widget machine in the back of my class.

Because the harddrive was so small, I had to be judicious, but I was also able to some helpful software on there, as well.

This tower is officially retired now that I have a class set of iPads since the kids could use those for every role the Mac had filled.

I don't even remember the specs on this laptop except that it has no internal wireless card and the install of Windows XP that was on there when I inherited it from my parents was trashed. To put it more positively, I finally had a machine I could (potentially) destroy by going all-in with a small Ubuntu Linux install. This was made EXPONENTIALLY more difficult without the internal wireless card (although, chances are it would not have played well with linux anyway), so every time I wanted to update software or retrieve a new package, I had to dig a network patch cable out of the basement and sit on the floor next to my TV (where the modem and router are).

This harddrive was a little more manageable, but the processor is incredibly sluggish, so I soon realized the prospects for this machine were actually pretty similar to the Mac previously mentioned. I could run Notebook software (this time, Express). Video streaming was still pretty much a no go, but if I was patient enough, I could buffer some YouTube.

Again, because of the iPads, this laptop had no more of its current roles to fulfill. On a whim the first week of school, I made it my sign-out/sign-in sheet. I can leave it by the door with only one thing to plug in (instead of monitor and CPU), and its still out and present for other uses. I was a little concerned about theft, but since I got it free and don't really use it, I wouldn't really be missing it. I like having that record available right by the door for easy reference.

Anything interesting you're doing with your old machines? Budget-crunched schools are dying to know!