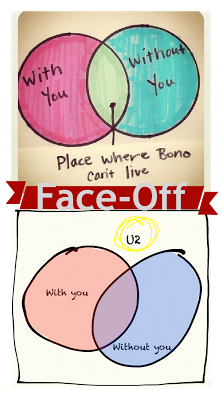 Have you seen the top Venn diagram on Facebook or Twitter based on the U2 song "With or Without You?"

I'm always pleased with math-type subjects creep their way into everyday life, and this diagram is no exception. (Little known fact to the general public: English and history teachers stole Venn Diagrams from mathematicians)

The top diagram is cute, and a good conversation-starter, but I don't know if it's correct.


Here's the lyrics in the chorus we need to dissect:

It seems to me that the correct placement of Bono depends on where you're choosing to stress your interpretation. Is it in the double-negative spiral of "can't" and "without," or is it as cut and dry as "or and "and"?


Which diagram is correct?

Further study on this topic:
"With or Without You Venn Diagram Meme"
"You, Bono, and a Venn Diagram"
"Bono Residency"