Give Your Students More Control (and Make Yourself the Hero)

How many times have you thought,  "Now would be a good time to bring a student up to the board to work out a problem and have some more students interact in forming a solution..." but hesitated, or refrained from following your instinct because you knew they weren't going to be able to get through it at nearly the pace you could yourself?

Wait. Is that the point? 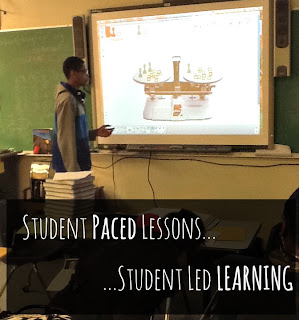 A student-centered classroom is messier and crazier because that's how kids work. A student-centered lesson does not look perfectly sequenced and free of error because the students are in draft mode. If they had all the connections and outlines to make a perfect presentation, there'd be no need to cover it.

I've you've ever helped a toddler or small child with a life skill, I think you'll know what I'm talking about. I went to the store with my 3 year old on Sunday night and I enlisted her help in "the problem." (Putting groceries on the conveyor belt and them sacking them up at Aldi).

Spoiler alert: she couldn't do it alone. :)

But there were some things she could. She proudly hoisted those rice cakes onto the belt, and tried her darndest with the pineapples. When it came time to bag, I think it took her all of the time I was bagging everything else to put the two rice cakes into their own canvas bag. It obviously took time, but she was able to problem solve, engage in some productive struggle, and eventually worked it out.

Fast forward to my AP Stats class today. I have a student who has missed a ton of time recently because its music competition season in Missouri and he's been practicing/performing different places. He's the type of kid that never does any homework or extra practice, but manages to get by alright with what he picks up in class.

Obviously, this strategy is unsuccessful when you aren't in class. So, there was some very basic understanding and vocabulary that he was missing from like, 2 weeks ago. When "Ryan" asked if we could do an exercise from the book together at the board, I welcomed him on up.

Here's how it went:
Warning: Making yourself the hero is NOT about preventing your students from writing some "wrong" things, finishing the problem for them, or taking back control. It's subtle, but its about finding a way to use the words/ideas your students have already posited, and making a connection or affirming someone's hunch to redirect the class down the right path.

I think Ryan learned more today because we were at the students' pacing, not my own. I'm in consistent need of reminder that it doesn't matter how much we get through if (1) we're going to have to do most of it over again, and (2) students aren't learning because the pacing is inappropriate.