(How to) Start A Classroom PBIS Lottery

"Menos cinco," I heard my Spanish teacher call out time and time again after I was talking or otherwise off task. My teacher had started a behavior point system because of a handful of us sophomores with impulse control issues. I don't know if there was a set list of behaviors that warranted "menos cinco," or if it was just anytime we were disruptive, but if the tactic was aimed at me in particular, it was quite unsuccessful.

I heard recently on a +Freakonomics  podcast about a recent trend by economists to attempt to modify behavior using lotteries that participants "paid" into with appropriate behaviors. (http://freakonomics.com/2010/11/18/freakonomics-radio-could-a-lottery-be-the-answer-to-americas-poor-savings-rate/)
A bank offered "Save to Win" savings account and attempted to get owners to put more money in their accounts by giving them a ticket each time they made a desposit. Whatever money they deposited was still theirs to keep, (as opposed to traditional lotteries that aim to raise revenue from profits - education in my home state of Missouri), and anyone that entered the lottery by saving into their account had a chance to win. In the study, there was a statistically significant increase in deposits during the lottery period.

On the heels of one of the least motivated group of students I've had in class, I wondered, "Could you get the same effect in a classroom? Could I provide incentives to get more students to do the things they should be doing anyway (completing homework, helping peers, bringing materials, staying on-task, asking questions, etc.) that would cost me nothing? 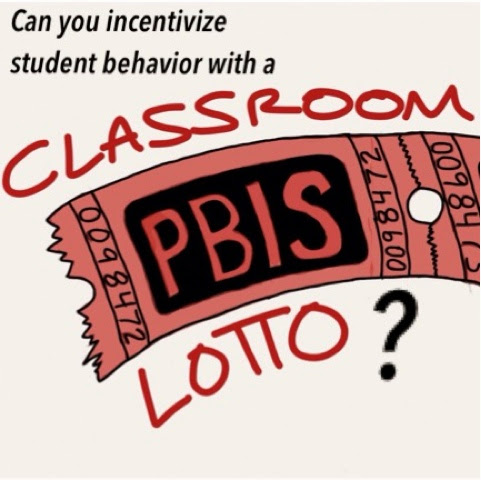 INCENTIVES
What do your students most often ask for or want? Here's a quick list for my band of brothers:
Hall passes
Homework passes (assignment excused)
Free time
Candy
Supplies (paper/pencil/calculator)

OPERATIONS
There are a few things you'll have to decide:
How will students get tickets?
What will you use for tickets? (Ready-made raffle tickets? Handmade and photocopied? Digital entires via a Google form?)
Who will keep track of tickets?
How long will you go between pulling winners?
Could an individual student give his "winnings" to another student?
Can students operate "office pool" style and split the winnings (assuming the incentive is something that could quantifiably be broken)
Is there anything a student could do to lose tickets? (If you're doing this true PBIS style, this would have to be "no, there are no punitive consequences")

WHY DOES THIS MATTER?
Some kids are going to find ANY reason to sit and do nothing (and drag their peers along with them) but for the kids that need DAILY feedback or praise, and the kids who are less motivated by "get a good grade on this week's quiz," a PBIS lotto to give out something that may not even cost you a cent is worth a try.

HOW IS THIS DIFFERENT THAN A CLASS STORE, WHERE KIDS BUY THINGS YOURE GIVING AWAY AS WINNINGS WITH TEACHER-BUCKS THAT THEY'VE EARNED?
It will probably look rather similar to a currency-based system, but with at least one distinction. When  I was trying to earn Mole Dollars in my Chemistry class, once I got the notion that what I really wanted was going to be out of my reach of my potential income, I stopped caring about earning mole dollars. I would either give them to friends or just shove them into my chem folder without thinking about them any more until the next stray mole-earning event.

Granted, even in a lottery system, those that earn more tickets have a higher chance of winning, but anyone with a ticket still has a shot. If you follow the NBA draft lottery, you know the Cleveland Cavaliers could tell you that even the improbable happens sometimes. (They were recently awarded the first pick in this year's draft while holding the least probably of winning the lottery of all the teams participating.)

The same trait of traditional lotteries that makes otherwise rational people spend money on a chance instead of saving it to buy tangible goods will give some of your student who might otherwise check out that day a chance to win.

Who doesn't like feeling like a winner? :)
at 23:34 No comments:
Labels: Apstats, classroom management, community, freakonomics, innovation, lottery, PBIS 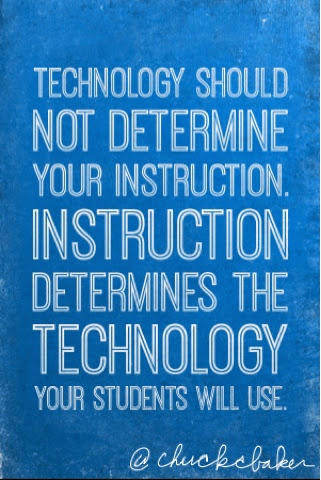 I've got a friend at school that is trying to choose his first Master's degree and has narrowed it down to  education technology, school leadership, and math.
After seeking my input, I told him I felt a lot of value in my edtech degree from Mizzou not in how to USE technology, but in how to APPLY technology. The tools change, but the principles should not. Trying to find different ways to express that I came up with the snippet above.
I find that the PEDAGOGY is hardest to communicate in tech PD sessions because people are often only listening for the how-to, not the why. It's not sexy, and won't always impress your audience with flash, but setting the instructional foundation for the technology in our classrooms in most important for learning.
at 20:09 No comments:
Labels: curriculum, edtech, images, instructional design, technology

Does Paper Get Your Students' Attention? 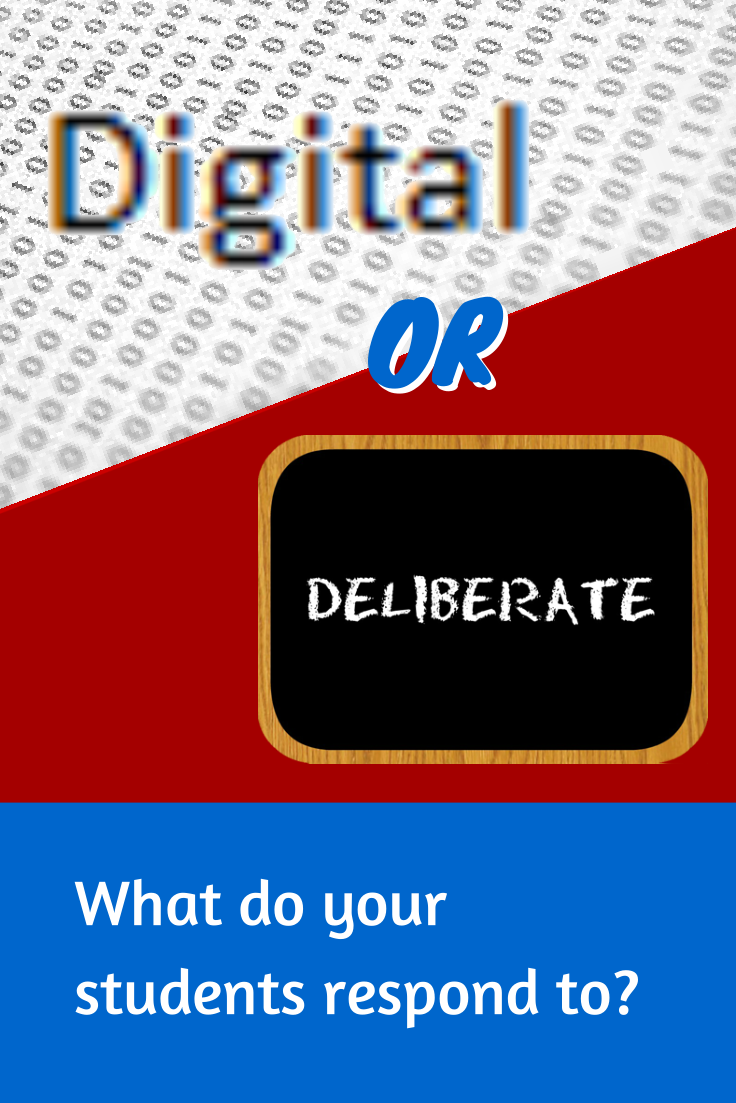 We've had online grades for several years in our district, and some students and families check and keep track of their progress almost to a point of obsession. However, I have a larger sample of students who either rarely check Edline, or "don't have Edline," which means, "it never bothered me enough to go downstairs to technology and get my information."

All that goes to say, no matter how consistently I update their online grades, or how many digital resources I give my students for help or for projects, many of them seem to respond with much more urgency to a piece of paper. It almost seems that anything digital gets lost in the clutter of Snapchats and iMessages.

I'm reminded of this cartoon that I think anyone over the age of 25 can relate to.
Has the novelty of ubiquitous access to information already dulled so much that the paper-based teacher has more opportunity for influence with some of our students?

Technology is no longer novel - what's next?
Although its definition continues to evolve, we've seen the rise of the "techie-teacher" to a place where its not really a unique role anymore. The popularity of Pinterest and "crafty" websites like it lead me to think the "artisan-teacher" is the next realm. The "artisan-teacher" uses paper almost ironically. Purposefully. Not because he or she has to, but because it gives an extra touch of personality to their craft.

Some emails don't necessarily need a reply, but you want to let the sender know you read the email and will act accordingly or approve of the course of action. Most email platforms have send receipts, but they require the sender to set them up prior to sending, and still at best prove that you opened the email. 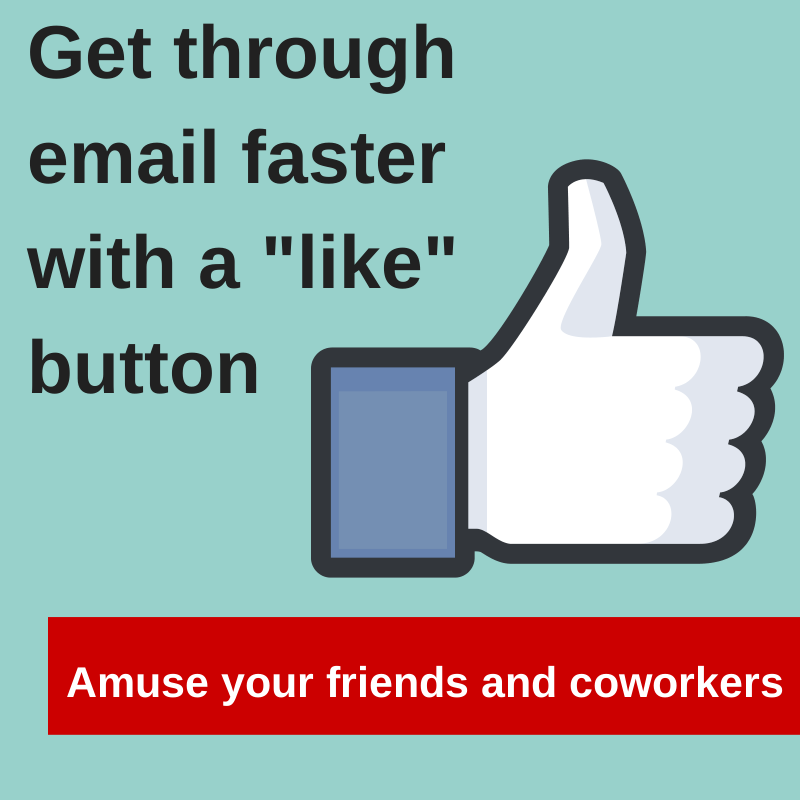 To solve this conundrum and clear my inbox, I took a page out of my social media habits and saved my own facebook-style "like button."

In the example above, I responded to one of my assistant principal's emails about make-up fire and tornado drills we'll be having next week.


It's a pretty quick process on a desktop/laptop, but you're probably better off just using an emoji on a phone or tablet.
at 11:28 No comments:
Labels: computers, email, facebook, technology, tips 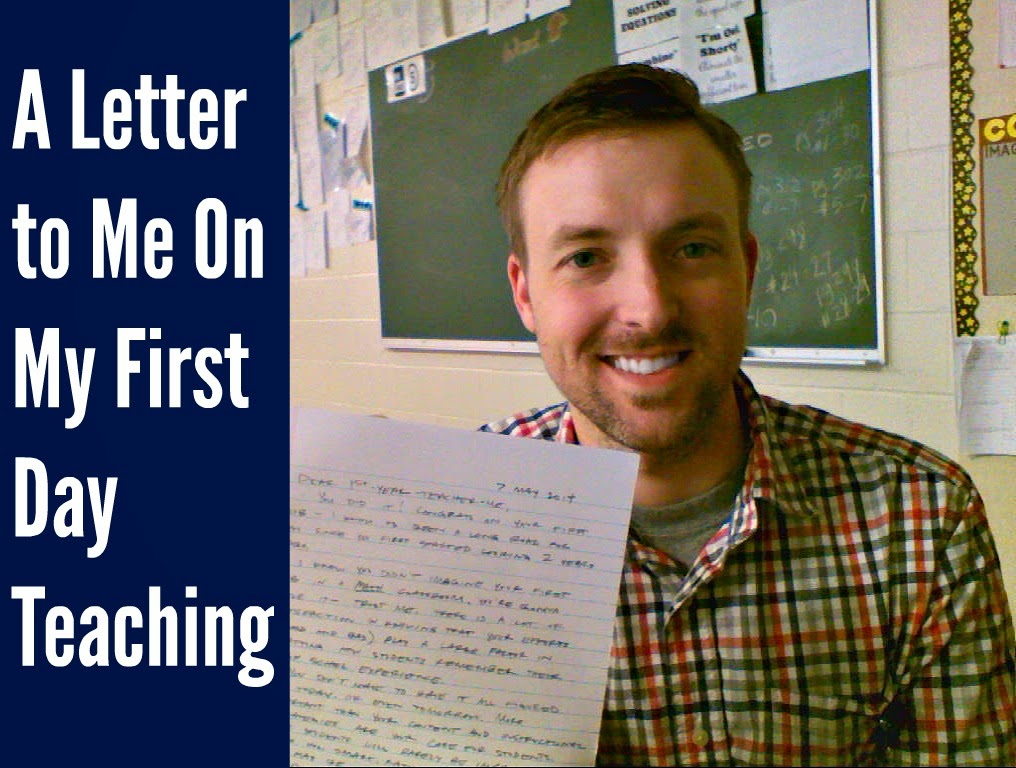 Have you seen this video from Edutopia and SoulPancake in honor of Teacher Appreciation Week yet? (Prepare the tissues)

I've written a post about your first year teaching before, but "letter to me on my first day of teaching" seems different, so I did that this afternoon during my prep.

You did it! Congrats on your first job - I know its been a long road for you since you first started applying to social studies jobs 2 years ago. I know you didn't imagine your first job in a math classroom, but you're gonna love it - trust me. There is a lot of satisfaction in knowing that your efforts (good and bad) play a large factor in crafting how your students remember their high school experience.

You don't have to have it all figured out today. Or even tomorrow. More important than your content and instructional strategies is your care for students. Your students will rarely be impressed with how smart, rational, or quick-witted you may be. They will remember and respond to how you treat them, how you respond to them, and how quick or slow you are to quit on them.

They won't respect you for your degree, your content knowledge, or even your skills with technology - they may even resent you for it. The best relationships you have with students will always be driven by how well you show your care.

I know you've got two lessons to prep for tomorrow, so let me finish with a few tips to carry with you.

1. Be quick to listen and slow to speak.Students sometimes just need to be heard, and our colleagues are always good for a fresh perspective to a problem you may have. The only teachers or student-teachers I've seen completely flounder or burnout are the ones without the humility and wisdom to know you never have it all figured out.

2. Show your care first, then your students (might) care about what you have to say.I've see a few, but its been rare that I've bonded with students with the math. What I've seen much more often has been students who will persevere because we've bonded over something else. If the learning spark never ignites, however, don't beat yourself up. Ultimately, its up to the kid.

3. You can't be friends with your students, but you can love them (and you'll understand that more the older you get).They're still kind of close to your age right now, but by the time you're in your early 30s, they'll have more in common with your own children than they do you. Just as you would with your own, never tire of second chances, and be careful to burn any bridges you'll have to repair tomorrow. The best you can do as their "friend" is to be "cool" - a passing achievement indeed, but if you love them enough to let them hurt you, or even disappoint, then you can win them.
Good luck, Chuck. Whenever you have tough days (and they will come), always remember that your heavenly Father knows and gives you everything you need, and He will come through at school as well.