We're discussing sampling techniques in AP Stats right now, and I think a lot has been discussed in conventional and social media since the August 9th shooting of Michael Brown about the "real" Ferguson.

I teach in the district covering Ferguson, MO, so I've had students in my classes that I'm sure can identify with the popular claim, "I am Mike Brown."

I ran across this article in the NY Post over the weekend criticizing CNN's reporting of the looting, violence, and arson following the grand jury decision on November 24th. 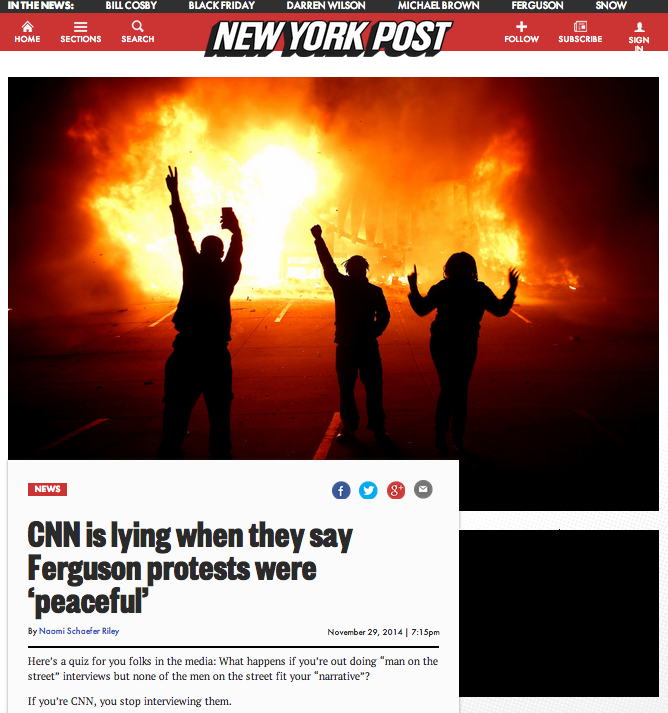 The question that comes to mind first when I see this image paired with this headline is, "Well, how would we know?" There are so many variables playing into reporting of the protests. Who is "from" Ferguson? What is the line between "peaceful" and "violent"? Because St. Louis County is so fragmented with numerous municipalities, is there a big difference between being "from" Ferguson and being "from" one of the numerous small cities/villages/towns that border the Ferguson city limits?

Who's "more" of a part of Ferguson, the demonstrators at night or the people that come to clean up in the morning?

As I included in the teacher notes of this story when I posted on 101qs.com, I don't know if there is an "answer" to this question, but I think its a fantastic opportunity to talk about representative sampling, potential bias, and thinking through demographic and survey data that would be relevant in painting the most "real" picture of the attitudes of Ferguson residents.

The story on 101qs with aligned common core standards and accompanying questions, notes, and resources is here:
Representative Sample - Is CNN Lying in its reporting of #Ferguson? - 3 Act Math Story

Evaluating as a 3-Act Story


In closing I would ask you to rate by the simplest barometer of success for a 3-Act Math story: Is this "perplexing?"
at 00:25
Labels: #ferguson, 3 act math, ap stats, relevance