I started the "Circles and Trigonometry" unit on my Applied Math class this week, so to get them triggering on some prior circles knowledge form Geometry, I threw up some basic circle area questions for the Do Now. I expected they would be able to do them, but my goal for the activity was mostly just to get them thinking about radii, diameters, and angles. 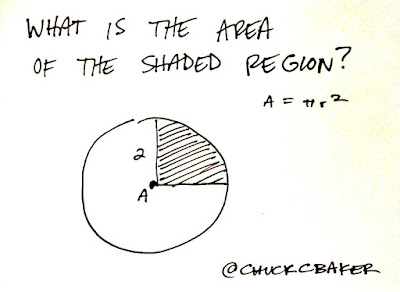 This first photo was as difficult as those Do Now questions got. Where the conversation got interesting was when a student called me over for a question.

"Hey, can just make a triangle in here and use the Pythagorean Theorem? Would that be close enough?"

What a great question! What's so good about it?

She didn't know it, but I think that's THREE of the eight Standards for Mathematical Practice she's exhibiting or about to exhibit! 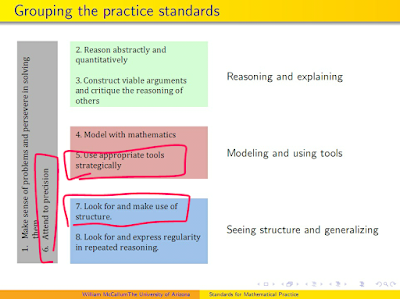 HOW DOES THIS BECOME AN UNGOOGLE-ABLE QUESTION?
One of the most important things you can do to present your students with UnGoogle-able questions is to be open to opportunities for them!

Instead of reacting negatively to this student and telling her to just use the area formula, I made sure to celebrate that question.

"Hey, that's a great idea, but I don't think that's going to be close enough. I like that you're thinking, though!"

What made this question worthy of UnGoogle-able status, however, was that her question stuck with me through class and into lunch that day. I knew that one triangle wouldn't cut it, but how many might it take? I spent lunch doing some calculations on my chalkboard. 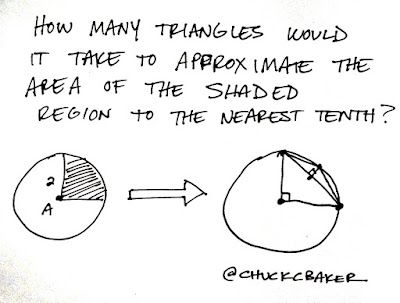 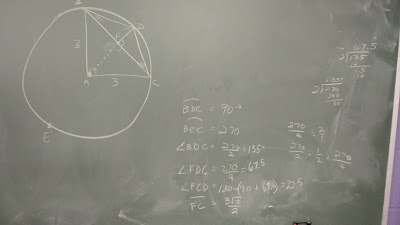 This question got better the longer I thought about, and the more I talked about it with my colleagues.

As I was playing with the triangles myself, I started getting annoyed with all the radicals in my calculations. I wondered, "Does it even to be RIGHT triangles? Does it even have to be TRIANGLES?" 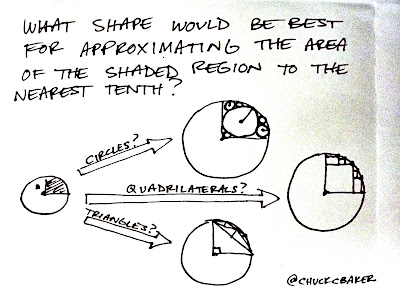 Once I landed on that thought, I knew I was ready to enshrine this question because it had several of my "UnGoogle-able" characteristics.

I can't wait to see what my students do with this question!

What about you? Where else would you take this idea?
at 23:51 No comments:
Labels: circles, curriculum, reasoning, triangles, UnGoogleable

I really like this satellite image from NASA of center-pivot irrigated farm in Kansas - it looks like hundreds of pennies to me.

What questions could we ask with this image?
Some of my ideas:

This question is not high on the "UnGoogleable" scale, but another important aspect of real questions for our students is that they are timely.

When freshman came in this morning talking about who all had been drinking over the weekend and embellishing stories of "the best way" to sober up, after taking a minute to get over my frustration/anger at the absurdity of the chatter, I wrote this problem on our whiteboard for their Do Now. 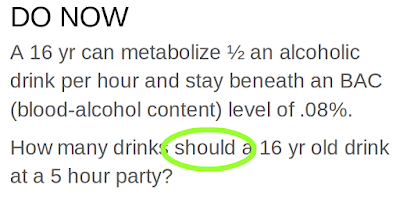 More than the math our kids can perform (which several kids "successfully" calculated to be 2.5), it matters who they are now and what they are becoming. I don't mean to imply that kids drinking at a party is the end of all sins, but I think it is important that my students know that I care about what they do when they aren't with me. I'm not a math robot, so I refuse to teach like one either. :)
at 21:57 No comments:
Labels: applied math, relevance, UnGoogleable
Newer Posts Older Posts Home
Subscribe to: Posts (Atom)