A Math Limerick Led My Students to Learning History

I ran across this mathematical limerick somewhere on social media over the weekend, and threw it at my students purely as an equation to simplify for their Do Now this morning. 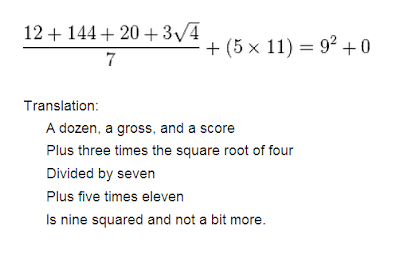 The best I can cite it is from here: https://www.math.hmc.edu/funfacts/ffiles/10001.8.shtmlAfter giving students time to evaluate the expression and verify its veracity, I showed the word form and had a student read it aloud. Who hasn't heard "Four score and seven years ago..." and at least tripped a little on how much time a "score" is? That of course then med us to looking up WHO said it, and from which speech, exactly, it came from. I found more on mathematical limericks on this post from another blog - http://poetrywithmathematics.blogspot.com/2010/03/mathematical-limericks.html?m=1How could you have your own students write math limericks in the same way? First you need to know some things about limericks (taken from the link above): 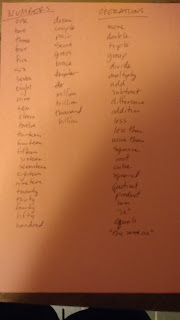 "A LIMERICK is a light humorous, nonsensical, or bawdy verse of five lines usually with the rhyme scheme aabba. Rhyming lines 1, 2, and 5 contain three anapests (that is, sequences of three syllables with an accent on the third syllable); lines three and four contain two such sequences. (Often the accent pattern varies a bit from the definition; for example, a line may being with only one non-accented syllable.)"

Next, I'd have students write out a list of numbers and operations to use in their rhyming.
The last bit is the hardest... actually writing the limerick. I'll be honest - I expected to be able to do this without much trouble. I could not. :)Someone train me in this wizardry - I want to be able to do it with my students! 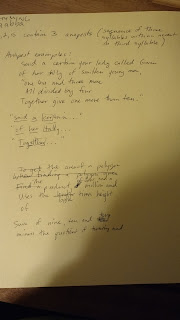