I've known about BreakoutEdu for almost a year and a half. I've facilitated the "Decoding the War" game a couple different times at events with Connected Learning, and I've had a few different conversations about the game with other educators, but I would not have called myself really enthusiastic about the experience. Truthfully, the thought of playing the game myself made me a little nervous - having the answer key always makes the game seem easier. :)

Fast forward to last night - a combination of feeling a little under-inspired for the week on Sunday afternoon, randomly jumping into the #tlap chat on Twitter (Teach Like a Pirate) where one of the questions challenged us to "wow" one of our lessons this week, and a cup of coffee I drank to late led me down a rabbit hole.

Before I get into the nitty gritty, let me give you dessert - photos of kids in action, having a GREAT time at school! 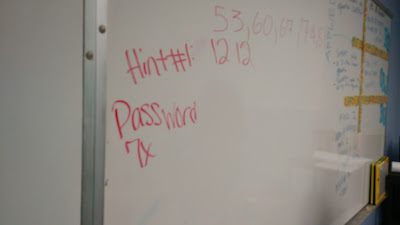 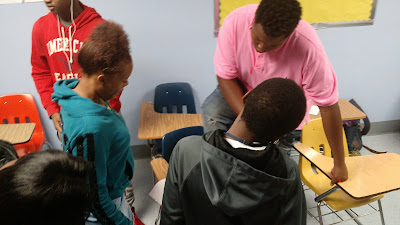 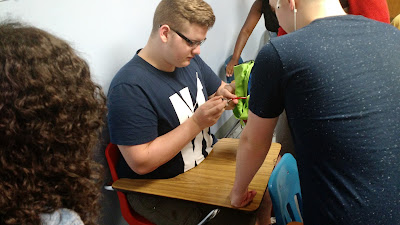 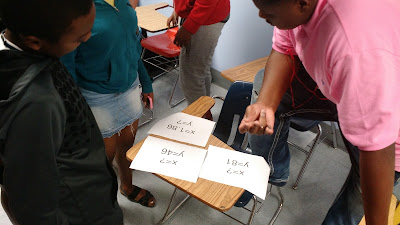 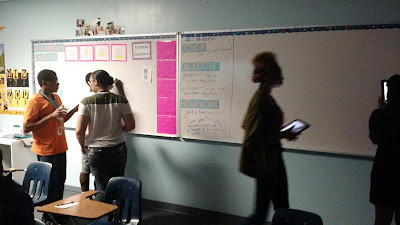 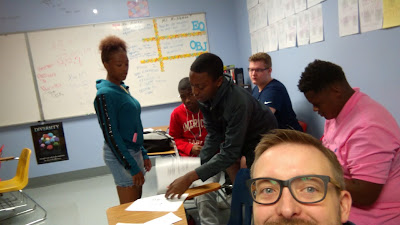 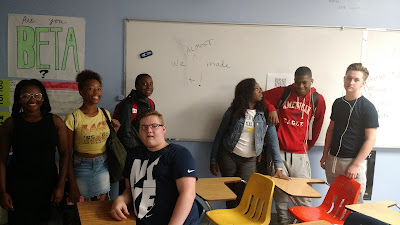 Step One: The Lock
I've had a rifle lock from my summer at Marine Corps Officer Candidate School hanging on the pegboard in my basement for 10 years with nothing to do with it. I'd forgotten the combination. Somewhere along the way of going to bed, that lock caught my eye last night and beckoned me to crack it. After spending 10-15 minutes trying to crack the combination the "right" way, I found the tutorial for drilling into the back. Bingo. I had a combo lock for a BreakoutEdu game.

Step Two: Setting Up the Game
The first decision was on content for the game. I'm in a linear equations unit, so I knew that I wanted to throw some equation writing and solving at the kids. Next I planned out the puzzles/activities of the game. 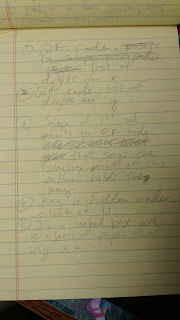 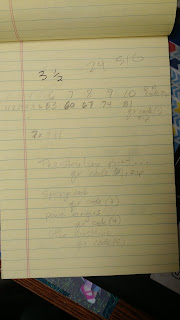 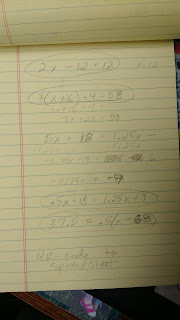 Step Three: Generating QR Codes (Beware, they all look the same!)
To get a QR code, I did a Google search for "qr code generator" and found several options. All of your choices basically all do the same thing - they give a text box for inserting text or a link, you click on "generate code," and then you download your image file. Here's where you need to be careful - notate somewhere on paper or in another file what each QR code file name points to aid in sorting them out when it comes time to print or embed them somewhere. The quickest way to ruin your game could be a QR code that points to the wrong source. I made a separate code for my X and Y values (but didn't say what the numbers were for), and one that pointed to a file with equations to solve that would reveal the combination to the lock.

Step Four: Learning More Stuff (How Can I Password Protect a File?)
One of the things I like best about the Decoding the War game on the BreakoutEdu website is when you have to enter a password to open a spreadsheet for the next puzzle. I imagine this was done with some CSS or Javascript, but as the title suggests, I didn't have time to figure all of that out. I found this Google Apps script and tutorial and ran my information on an encrypted spreadsheet. In looking for the link to the script I used today, I found DocSend, which seems like a better solution, actually.
I also found this tutorial, that utilizes Google Forms and data validation!

Step Five: Gather All Your Materials
Given that it was now after 1 in the morning, I didn't want to leave any of my memory to chance, so I made a Google Slides deck of things I needed to do to set up the game in the morning, a few notes for myself, and a backup copy of the QR codes so I could print them quickly if they weren't scanning from my SMARTboard. In between my sections of this class, I also added a slide for explaining the game. 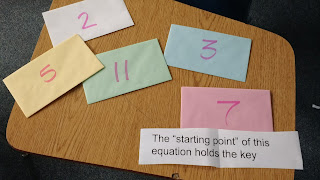 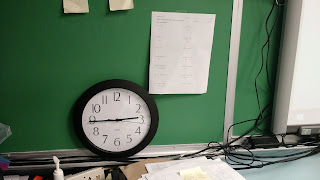 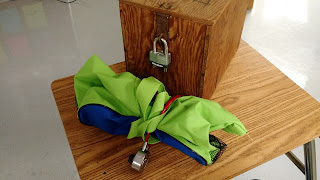 Step Six: Advertise!
The best way for others to "get" what a BreakoutEdu game is all about is to see one in action, so I sent an email to all my colleagues this morning letting them know that my 2nd and 5th hour classes were going to breakout of the room. That's really all I said, because I wanted them to come with their curiousity. As an added bonus, my principal came and threw in an informal observation. :) (Kudos to my student who perfectly articulated what was going on).

What Will YOU Learn?
One of my classes worked really well together on attempting to breakout, the other did not, and it was completely emblematic of the dynamics of each group during "regular" class days. My morning class trusts me and each other, takes risks, they help each other, they challenge each other... it was fun to watch. My afternoon class is cooperates/collaborates much less, they barely know each others names, and they didn't really listen to each other OR me (when I gave hints). It was disappointing, but I hope to make a teachable moment tomorrow!

Should I Play a BreakoutEdu Game with MY class?
Yes! Creating the game myself, while more "work," (it was a labor of love, really) had me more invested in committing the class time to it. The clearest testimonial for the power of the game, however, is all of the passes I had to write to class when kids couldn't bear to leave because they wanted to crack the lock!
at 16:23 No comments:
Labels: #breakoutedu, applied math, equations, games
Newer Posts Older Posts Home
Subscribe to: Posts (Atom)